The Influence of the Eight Green Bags 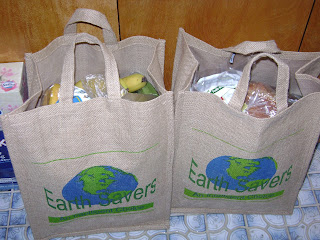 Each of us influences others. By what we say and do. And also by what we don’t say and don’t do.

Several friends, acquaintances and strangers got back to me regarding my CDT column asking Santa to forgo Gift Wrap , and my Christian Science Monitor essay on Giving Gifts that Leave Only a Memory Behind.

They shared their decisions to forgo wrapping paper, or give a gift of food … but more importantly, they shared with me their ideas and their actions for consuming less.

A neighbor shared with me some of her childhood memories - of how her parents had always left unwrapped gifts for her and her siblings under the tree, and how the kids “somehow” knew which gift was for whom. Her story showed me that forgoing gift wrap was not only a future possibility, but that it was a tested and workable idea from the past in other homes.

A friend shared with me her idea of giving a gift of "a recipe for a favorite food, along with all the ingredients needed to cook it." And presented me with an alternative to my idea of gifting healthy, home cooked meals.

I heard from a few people about traditions of baking special holiday cookies, and delivering them in brown bags.

I also learnt about a mother and daughter, who each keep a basket for the other in their homes, fill them with gifts over time, and then trade the baskets when they get full. No gift wrap needed here – all that is needed is the love to figure out what the other needs.

Fast forward to the first week of the New Year – when I found myself at the grocery store - my cart holding groceries in the six brown bags I had requested instead of plastic bags. I looked up to see another woman, also leaving, her cart filled with eight green cloth bags of groceries.

Suddenly, in the face of her example, I had no excuse for the three tote bags that I had left behind in my car, thinking that I would need more than that for the groceries I needed to buy.

The image of those eight green cloth bags stayed with me; and made me carry my tote bags in during my next trip to the grocery store.

One tiny step….among many that I will hopefully take, in this New Year, thanks to the inspiration of another person using her eight tote bags.

As I described my new “tote bag” ritual to my husband and daughter, I shared with them the hope that the sight of my mismatched, lumpy tote bags would inspire more than laughter in someone else.

Perhaps get them to commit to cloth bags? Or to work to ban plastic bags in Pennsylvania? Or to do something even more momentous?

All within the realm of possibility – considering how unpredictably simple and powerful ideas get transmitted amongst us, sometimes going on to catalyze changes and create new traditions, all because of our power to influence, and our openness to being influenced by each other.
Posted by Nalini Krishnankutty