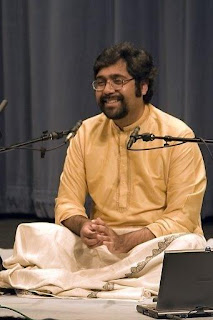 This past Saturday, I went to a music performance of North Indian Classical Music, along with my husband and daughter.

The venue was the Center for Well Being in Lemont. The singer was Arijit Mahalanabis, a former resident of State College, who attended State High and Penn State, and now lives across the country in Seattle, Washington. He was accompanied on the tabla, a percussion instrument, by Kuntal Roy of Kolkata, India.

As Arijit began his concert, music in the classical traditions born a long time ago, from a world afar, filled the air.

I could not understand the nuances, but I could still enjoy it.

Enjoy the pure offering of music being made, by someone who obviously loved it.
As I listened to the music, I was filled with wonder and awe. At the powerful forces that have sustained the love of Indian classical music in a boy who grew up in State College.

Forces that made him teach himself, since there were no teachers of the art in State College.

Forces that made him study music, even as he pursued degrees in math and computer science, and worked as an engineer.

Forces that have now led him to commit to music and its study full time.

Arijit did not have the benefit of listening to Hindustani classical music in the classical selections on NPR on a daily basis, or of having teachers at school, who could facilitate his study of this kind of classical music. What he was pursuing was largely unknown in the wider community he lived in.

And that makes his sticking to his quest worthy of salute - sticking with it long enough to enjoy the support group of other musicians in Seattle, to sustain him further.

At the concert, I was touched by Arijit’s commitment – and thought of a book my daughter had recently recommended to me - “To dance, a ballerina’s graphic novel, ” by Siena Cherson Siegel. The book documents a ballerina’s entry into dance, and the role dance plays in her life. Unlike Arijit, Siena has the support, at a young age, of an assortment of classes, and established institutions to support her passion.
Siena writes that she dances because “dancing fills a space in me.”

Perhaps, Arijit sings, I thought, because he has to… because “singing fills a space in him.”

And the rest of us are lucky that they do so - our world made better because of their passion for and their single minded pursuit of their art.

We are also lucky to have the Center for Well Being, East West Crossing and the other individuals who participated in bringing this experience to us.
To Arijit and to all of them, a big thank you…
Posted by Nalini Krishnankutty