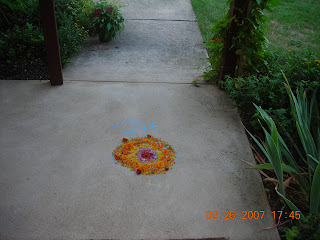 Our family celebrated a special festival, called Onam, this past weekend. We wore special Indian clothes, and set out to collect some flowers from our garden, to create a Pookkalam, or a design with flowers, on our front porch.

Just as my daughter was beginning to sketch the outlines of her design, her friend arrived on his bike.

“Nice dress,” he shouted out, “What are you guys doing?”

He came over, along with a lot of questions…

My daughter told him about the special festival.

Is it a neighborhood festival or just at your house?

No, No, No, not that kind of festival, this is a “holiday” festival. You want to stay and watch us?

Sure, this is so cool… Can I bring a friend over?

Moments, later, we were joined by two more kids, a nine year old and a middle schooler.

It smells so nice here, one of them said, perhaps on getting a whiff of fragrance from the incense.

My daughter and I told them about the 10 day celebrations that lead up to Onam in Kerala, a southern state of India, the days off from school that children would be enjoying and so much more.

Is it a festival like Kwanzaa or Hanukkah? Does it have a story behind it?

Yes, but it is a Hindu festival…

The four kids were soon creating the design together. As they finished their handiwork, I told them how my mother would create a different design on each of the ten days, from the flowers in her garden.

I shared pictures of her Pookkalams with them, and was rewarded with cries of “Wow” and more admiration.

Later that evening, I stood outside taking photographs of our Pookkalam – and realized how much we adults could learn from these four children.

My daughter had extended a welcome, and together, the four kids had made a trip across cultures and countries in the span of seconds, with dignity and respect –and without any judgement.

Now if only we adults could be more like them ….
Posted by Nalini Krishnankutty